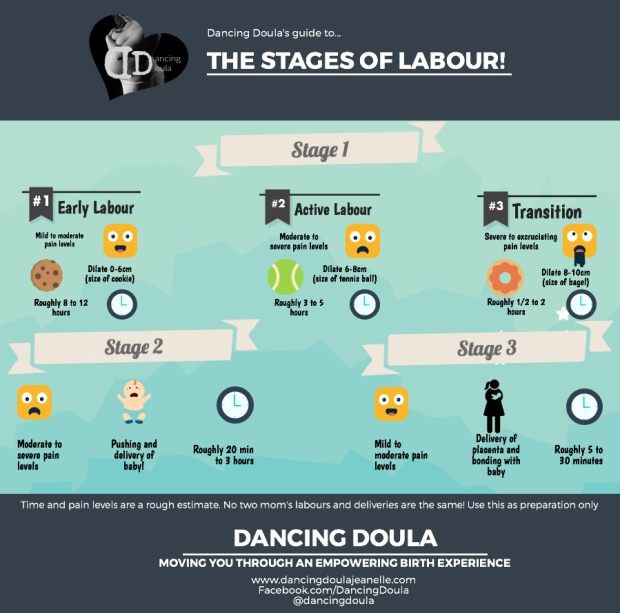 Any basic Birth 101 class *should* teach you the 3 stages of labour and what to expect from your body during each. As an Edmonton birth doula and Edmonton childbirth educator, I’ve studied these stages like the back of my hand and have seen or heard of them coming to fruition in various ways. I really want to talk about these from a doula perspective, as there’s so much to be said about what these milestones actually mean.

For starters, if you’re a first-time mom (or FTM in cyber lingo), you might be told that this is the way labour looks and if it doesn’t look like this, your birth is not normal. The truth is, a normal birth has a tonne of different outcomes, time lengths and perceived experiences. It is incredibly true when people say that no two mothers, no two pregnancies and no two births are the same! The lovely graphic you’ll see above is what I’ve designed to represent the rough estimates of a typical birth, but I’m going to expand on the important things of these stages below.

There’s a reason why the first stage of labour is broken into three parts. Just from looking at the graphic, pain levels will vary hugely and the amount of time this stage typically takes is 84% of the time your birth will be total. It’s important to keep in mind that the rough time estimates shown in the graphic are NOT always the norm… I’ve been to much longer births myself! This is mostly just an average, and it’s totally okay to not conform to that of your average peers. What’s really cool about the three parts of each stage of labour is the cycle of hormones that run through your body and the shifts that progress how far along you are. So to start with, when baby decides he/she is ready to come, they will signal your brain to start producing oxytocin. Oxytocin causes contractions which hurt, so in response your brain will produce endorphins which is your body’s natural pain-fighting chemical and will reduce the pain you get from the contractions. The cycle keeps going and going (as long as there aren’t any medical interventions disrupting the cycle) until baby is born, but what many people forget about is that in order for contractions to be productive, they must get stronger. Many people think that this strengthening of contractions is supposed to happen gradually throughout your entire labour, and for the most part it does, but there are two times when the increase in oxytocin is rapid. Can you guess when these times are? That’s right, between early and active labour and active and transition! So keeping this in mind, I hope you remember that when you’re all of the sudden unable to cope as well as you were with contractions before, to take some time, relax and wait for just 20 mins or so – your body is playing catch-up with the endorphins it’s producing.

Stage Two is (usually) NOT the most painful part!

One thing I actually thought to be true before I had my daughter was that pushing was going to be the worst part of labour. Understandably so, thinking about squeezing a human through a seemingly small hole sounded excruciating! However, let’s talk logistics of childbirth. First of all, your cervix gets to be a whole 10cm wide which is roughly the size of a bagel… not so small after all. Second, your vagina is ultra-stretchy, kind of like the neck of your favourite turtle-neck sweater. It will conform to the size of baby and then retract right back to normal size after the birth. Finally, the pain you’ve been feeling during the first stage of labour is partially due to your pelvis making some major shifts to fit baby though… so that part is done with. Now all you’re left with is exerting all of that built-up energy into the physical act of pushing. Not surprisingly, this stage can actually be somewhat relieving! Now, as I mentioned before labours vary hugely so there are some women who may experience painful second stages. A big culprit will be if there is an emergent situation where baby needs to come out right away and assisted birth tools are used. However, preparing yourself to understand what is happening and to make informed decisions will lessen the likelihood of falling victim to a painful push.

Another common misconception (and one that I was previously guilty of) is that stage three doesn’t really matter much. The bulk of the pain is gone, your baby is here and everything is rainbows any butterflies. But remember the love hormone oxytocin that ruled your labour? She’s still not finished yet! Oxytocin is SUPER important in stage three of labour as it is going to allow your uterus to contract and prevent excessive bleeding after delivery. Roughly 18% of women experience this bleeding so it’s very important that you understand what’s going on after baby comes, even if your main focus is going to be on swooning over your new bundle. If you’re going to deliver in a hospital with a doctor, they will often make one important decision for you if you have not voiced an objection to it previously. This is called active management of the third stage and involves getting a synthetic form of oxytocin administered and controlled cord traction (which is when the doctor will pull slightly on the umbilical cord to stimulate the delivery of your placenta). Now, this may be exactly what some women want, but it’s important to know that you do not have to do things this way! It is your decision to do active management or expectant management, which means using natural methods to bring about more oxytocin. Things like breastfeeding right away, nipple stimulation, immediate skin-to-skin with baby, keeping the room atmosphere conducive to mom’s comfort, etc. will all help the oxytocin to keep flowing enough to get that uterus contracting and avoiding postpartum haemorrhage. The choice is yours and no one choice is better than the other – do some research into the statistics and process of each before your due date approaches.

There’s obviously a lot of info about the stages of labour that I’ve left out of this post, but unfortunately this blog will not replace the good prenatal education you should have going into your birth! If you’re in Edmonton and having a baby, I’d love to guide you through the important things to know about childbirth (head over to my contact page to get ahold of me), and if you’re outside of Edmonton, AB I highly suggest looking for a prenatal class with a TRAINED childbirth educator (if you can find a Lamaze class, even better!)

Mother. Entrepreneur. Lover of Art. Social Butterfly.
I have a passion for educating mothers-to-be and for keeping childbirth beautiful. 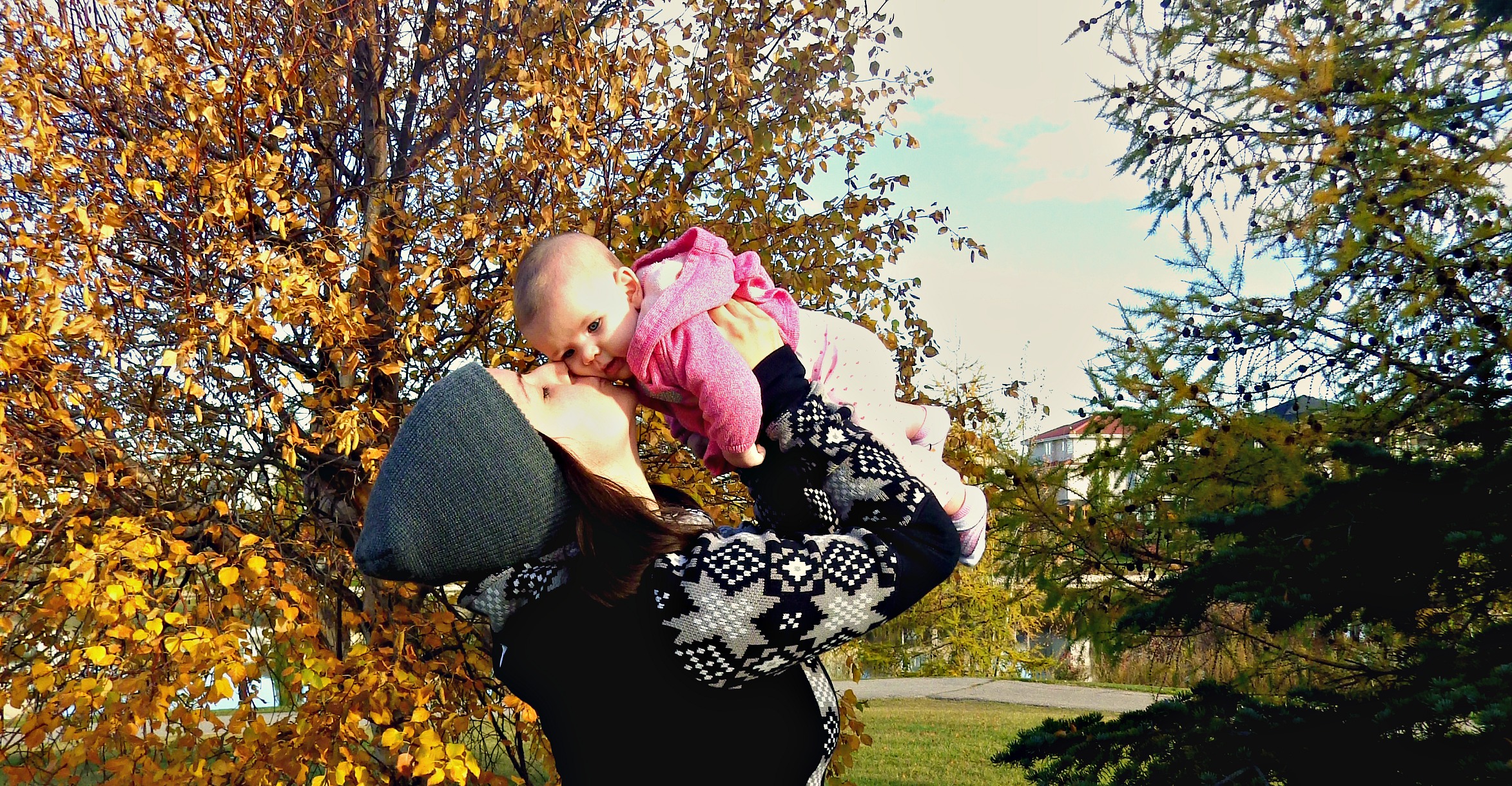